Helping Your Kids Get Set For Life 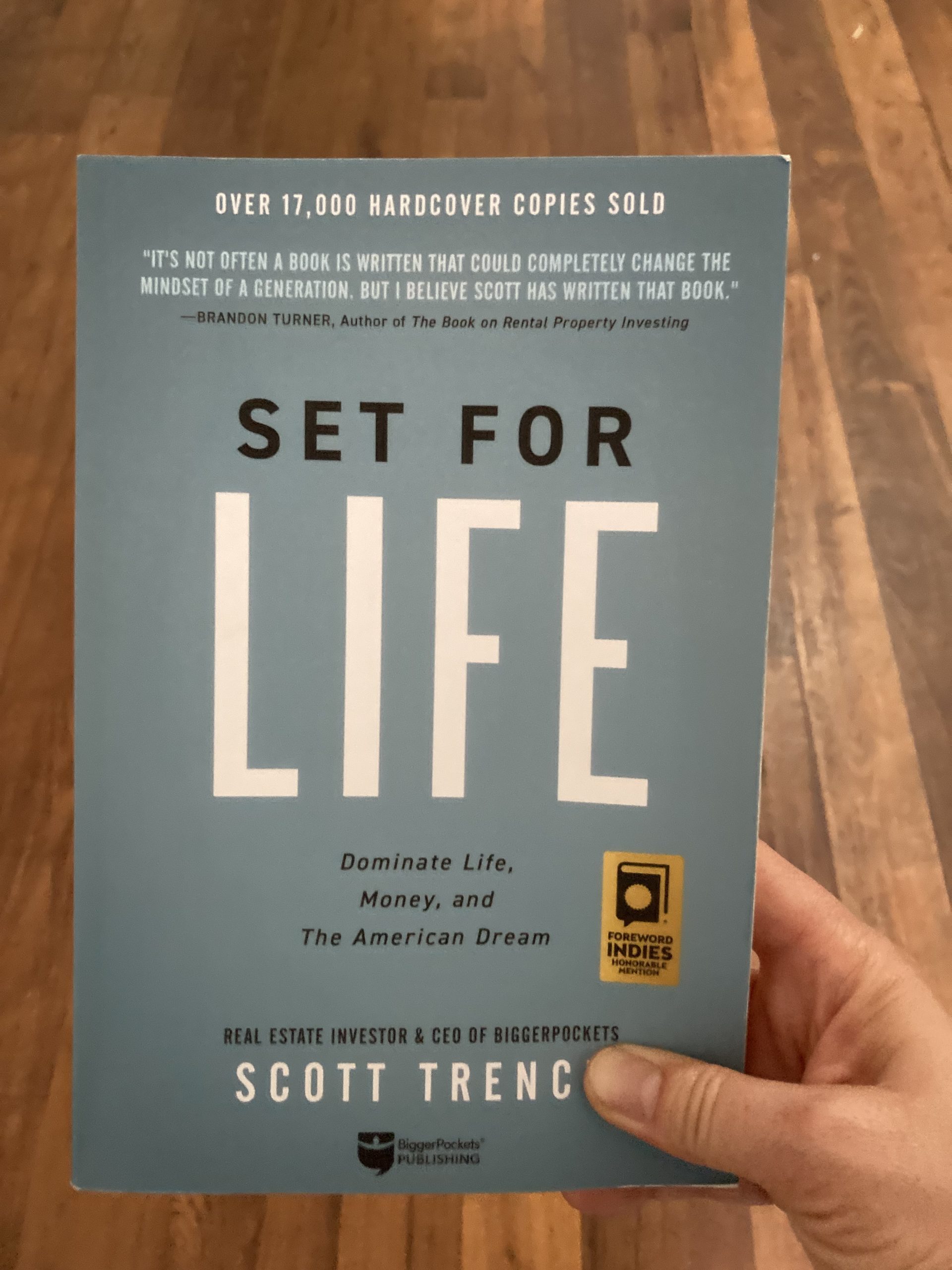 I just finished reading the book Set For Life by Scott Trench, one of the Bigger Pockets Money Podcast co-hosts, while I was traveling to Austin a couple of months ago. This book has become my number one recommended book for older teens/college students. I mentioned it a bit on social media but wanted to go into a deeper discussion.

A dream or a nightmare?

It’s normal to get sucked into the pursuit of the American dream – finding ourselves working forty plus hours per week at a job for thirty or forty years. Maybe acquiring a nice house, decent cars and hopefully saving up enough along the way to have enough to live on when it’s time to retire. The truth is for many people it is a real struggle. They never seem to make enough, and are one emergency away from disaster. But does it really have to be that way?

What do you really want?

I think that a lot of times we tend to get sucked into the way everyone else does things. I’m going to go to college, get a job and a spouse, buy a house with a white picket fence and have a couple of kids. Those things aren’t necessarily wrong, but often people just do what everyone else is doing without giving it any real thought.

This one life we get is a wonderful opportunity to make the world better. It shouldn’t feel like a jail sentence, but for many people that is how they act. I want my kids to own possessions and not have their possessions own them. A life trapped at a job they hate because they have to pay a car payment or a credit card payment does not sound like fun. I want them to have the freedom to work at what they love, have time to volunteer, and options that come from making wise financial decisions.

The roadmap for the alternate plan

Set For Life lays out a great plan for someone that doesn’t want to be tied down to a nine-to-five job for thirty or forty years. This book is a great roadmap to guide a young person starting out. It breaks down how they can design their lifestyle so they can achieve financial freedom early on an average income. The best time to really think these things through is at the beginning. It’s a lot harder to switch what you are doing when you are already committed to a direction. It will help the reader think through why do you want to live in a certain place, what would be the outcome if you made a different choice, would making a different choice really affect my lifestyle as much as it would my wealth?

The book is filled with all kinds of ideas to not only reduce your housing expenses and build wealth through real estate investing; but also tons of ideas on how to reduce your expenses, increase your income, and be more productive with your time.

For many years I had heard of the FIRE (Financial Independence Retire Early) movement. It intrigued me but I couldn’t really wrap my head around it. Listening to shows like Bigger Pockets and reading books like Set For Life really helped me see how it is possible.  I had never heard of house hacking before, but if I had it to do again I would seriously consider house hacking. I’d also spend more time and money educating and improving myself when I was younger instead of waiting until I was older.

I know that all my kids won’t do this. Some of them will feel like it’s too much work. That’s the beauty of life – we get to choose our own path. But I have one that is particularly interested in the idea. He rented out his bed to his older brother and slept on the floor when his brother had to temporarily move home for a couple of months. He doesn’t see college as the path for him, but he loves being a business owner. It’s great to be able to offer him an alternative path.

Do you think if we help them get set for life, the nursing home they put us in will be nicer?

← Prev: Are You Afraid of Crypto? Next: Teen Entrepreneurs →